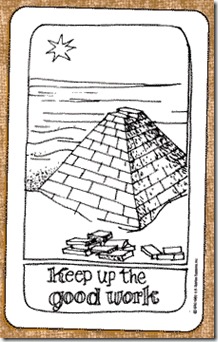 This card suggests that you are having, or soon will have, at least a minor (if not MAJOR)  breakthrough in terms of  progress.  This is also a card that says – KEEP IT UP!   You found something out about yourself and you’re ready to send it into motion and you unlocked an “aha!!!”   about how to do it.   You discovered a great new tool to use and you’re excited to put it into good use.  The new plan you hatched seems like it’s finally underway and you feel like you ACCOMPLISHED some actual PROGRESS !   Best of all, you actually felt EXCITED and even felt a little bit of positive expectancy at the progress you’re making.  (“I can do it!! I feel like I can do it this time… I can make this kind of progress a new habit! WOOO!”)    Part of you is standing on a chair and swinging a sweatshirt around and around  over your head like one of those celebratory beer-chuggers in a movie.

This is great!   Remember, though, that any new habit and new “rush” of movement WILL have a lull!  There will be an opportunity to  push forward and an opportunity to keep up the good work and be consistent.      Whether it’s a draggy day at work, a low-energy vortex, or a lull – don’t give up now!    Progress isn’t all “woo” and sweatshirt twirling, after all.   It’s slow and sometimes not-so steady effort and re-effort.  You might find that your inspired feelings are like lightning they strike but then…. poof!  where did they go?

Instead of falling into defeat or impatience because things aren’t as swimmingly awesome as they seemed that day when everything was possible, keep going and keep working at it.       Sometimes creating a new habit will require lots of repetition and some days may seem easier than others, but your goals are still worthy and it’s going to be worth all this time and dedication in the end.  That feeling of accomplishment WILL return if you stick with your task.

By the way, that doesn’t mean ride your own butt and become your own rigid task master.  Give yourself balance and time as well as consistency in your effort. You don’t want to clench up and squash all the life and fun out of your new found direction by anxiously trying to do it all instantly and perfectly.   We live in an instant gratification culture, but you’ll do best if you allow for time and allow for a mistake or two.  Give yourself a break!  See the project in the card above?  It’s the Pyramid of Khufu  in Egypt (Great Pyramid at Giza) and it was constructed over about a 20 year period moving 1.6 million pound of stone a day.  Chances are, your thing is going to go much faster and fraught with less danger and the only “slave driver” you’ll have to worry about is yourself, but it will take time and will not happen overnight.   (My guess is you have better air-conditioning than Egypt in 2560 BCE too!)      The pyramid reminds you that steady, consistent efforts can create something truly amazing over time.   Maybe even Seventh Wonder of the World amazing, if you just give yourself a chance!

Keep up the GOOD WORK!

Back by popular demand, this week’s card was courtesy of the’ ‘Morgan Tarot’

**About the deck:  This is the “MORGAN TAROT” by Morgan Robbins and illustrated by Darshan Chorpash and published by US GAMES (first in 1970)  – it’s not a tarot deck – but an 88 card deck of modern images and endearing (but very thought-provoking) concepts.    The artwork in this deck is priceless and 60s influenced and generally non-scary.  Some of the cards, like “Du Whacky Du” are downright hilarious, but there are serious and timely messages in the pack as well.  I no longer own the LWB that comes with this deck, but it’s reportedly quite trippily insightful.  Kind of like a car ride through Nevada with Hunter S. Thompson.

All writing © Willow Brilliance in Sight