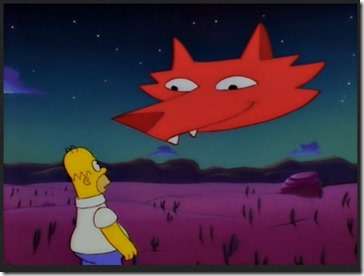 This week’s card is from one of my very first gift decks and continues  this month’s theme of “decks I would never have thought to buy  for myself”   (more about the deck at the end of the post):  Ted Andrew’s “Nature-Speak Oracle” deck.

This week we have our usual regular card plus a “hopper” (one that jumped out of the deck and wanted to be seen)  the first of which struck an immediate chord: 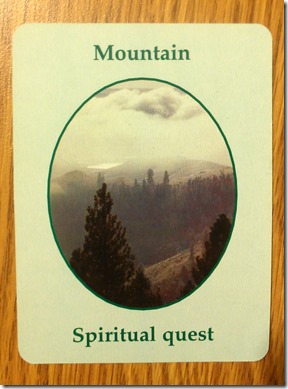 This weekend I had an unusual dream about a talking fox. When I awoke, it immediately made me think of Homer Simpson’s “vision quest” visitation (or Guatemalan insanity-pepper induced hallucination) of Johnny Cash as a helpful spirit-guide coyote who pushed Homer to question his reality and re-examine what’s most important to his very soul.

In times past, indigenous holy-men and shamans the world over would often prescribe “vision quests” for their people to revisit the wisdom of the Ancestors or to touch base with their Spiritual selves in answer to practical problems or pressing needs.   The quester would be put through various perception altering challenges in an effort to crack that tough “ego” nut we all carry around and which hides meaning and importance from us.    Today we spend our time working, Facebooking and TV-watching and, unless we’re a wealthy adventurer or reality TV participant in a primeval Ecuadorian jungle drinking hallucinogenic Ayahuasca with the Waorani tribe, the closest we get to a “vision quest” might be watching a Simpsons re-run.

This week’s card invites you to do your own spiritual quest.  You don’t need to quaff Ayahuasca, let yourself loose in the woods or eat an insanity pepper, all you need to do is expand your horizons and open your mind enough to let the unusual in.  In spite of the card’s appearance, your Spiritual side is not something you have to climb Everest and speak to the holiest Tibetan Monk to access -it’s within and around you all the time.    In this context, “Spiritual” does not refer to a religious destination either; it simply means touching base with your own soul, your concept of whatever lies beyond that gnashing, whirring brain and ego of yours and getting a new take on what you think reality is.   Take a voyage outside your normal perceptions, be astounded by the infinity of the Cosmos in a viewing of Alfonso Cuaron’s  great new film, “GRAVITY”  or undertake a unique journey close to your heart, just for you.

Challenge yourself to be ready for messages of the unusual in the unguarded moments between just you and the rest of the Universe and keep your eyes and ears open.       If you believe in Spirit , or even if you just believe in the astonishment that breathes and lives  in the profundity of planet Earth in all its variance and simplicity, now’s the time to let it “speak” to you.   It doesn’t matter  whether you’re in New York City’s Times Square or alone in the woods.      Don’t turn your attention away from the absurd or powerful messages that might be synchonistically dropping on your doorstep in the form of “signs” or visions from your deepest Self.   Pay attention to these winks and nods. Listen to the angels in a piece of music,  and don’t be surprised if you see a coyote and hear the voice of Johnny Cash this week.

Our “hopper card”   lets us know why all this mind-expanding, soul-finding reality-exam is important: 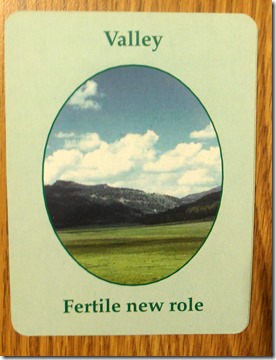 When those aforementioned indigenous peoples would travel in their nomadic lives from place to place in search of resources and growth, they would sometimes be blessed with a verdant valley with plant and animal life over-flowing, and abundance around every corner, just as you are metaphorically approaching in some form within yourself RIGHT NOW.     There’s a lot of WORK to be done when we approach that valley and your fertile new role means that you’re knee-deep in the actions and choices that make this new bounty “home”    —whether that’s changing something practical or changing a habit,  you have your work cut out for you this week and touching base with your “Guidance”  will help you get there.

Even if,  like Homer, your quest initially  yields a lighthouse keeping robot, keep your eyes open, keep striving and The Universe will help you see just what you need to see so you can step into this fertile new you!

About this deck:     “The Nature-Speak Oracle”   by  the late Ted Andrews, published by Dragonhawk 2006  is gentle   60 card deck  based on his best-selling  book (which I have not read)  called, “Nature-Speak: Signs, Omens and Messages in Nature”    This deck has bare bones imagery and photographic illustrations that remind me of a grade-school science text-book in its aesthetic sense but I just love it.   It may not be as visually stunning as many new decks, but it always seems to have an uncanny message.  Because I always concoct new uses for decks,  I invented a kind of  “Guidance mad-libs”  for this deck by laying out a card to fill in each blank:     What’s going on is______,  and what I can work/act on is_________,  so that I can  _______  and have __________ as a result.       (as an exercise, you can try that with just about any deck if you stretch your imagination).

All writing © Willow Brilliance in Sight